I believe it was 2002 when I first became aware of Tolson’s Chapel.  It was only six years after the death of Virginia Cook, the last member of the chapel congregation who, sadly, I never knew.  I remember my first visit to the chapel, when we opened the front door and saw the Bible still open on the lectern.  The hymn page numbers from the last service were still listed on the hymn board and hymnals were still laid out on nearly every pew.  It took my breath away and goosebumps formed on my arms as I became aware of the spiritual energy still present in the old log building.  I still get that feeling every time I open the chapel door. 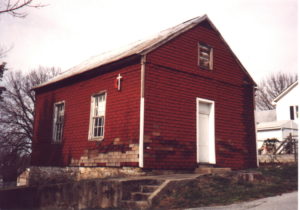 I remain eternally thankful to the United Methodist Baltimore-Washington Conference for having the foresight to seek out a preservation-minded new owner for the chapel.  And I am equally thankful to the Save Historic Antietam Foundation for taking ownership while the Friends of Tolson’s Chapel (FOTC) navigated the four-year 501(c)(3) formation process.  Fast-forward to 2018, sixteen years since that day we opened the chapel door in 2002.  The FOTC continues to grow and remains strong in our commitment to the preservation and interpretation of the historic building and its people who we have come to know and love. 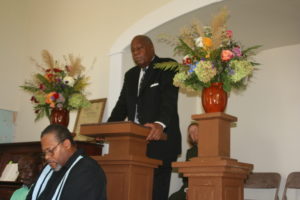 I want to use this first blog to look back on our many achievements over those sixteen years.  In all, we have received and successfully administered three Maryland Historical Trust (MHT) capital grants and two MHT African American Heritage Preservation Fund capital grants totaling over $130,000 to restore the chapel building and its adjoining cemetery.  We also received grants from the Preservation Maryland Heritage Fund and the Mary K. Bowman Fund (through the Community Foundation of Washington County) to install a beautiful informational wayside exhibit outside the chapel.  Grants from the National Park Service (through the Catoctin Center for Regional Studies) and the Hagerstown-Washington County Convention and Visitors Bureau helped us to establish our internet presence with a comprehensive website and a professionally designed four-panel brochure.  Grants from the Heart of the Civil War Heritage Area supported our 2012 Dignity of Freedom Symposium held at the Antietam National Battlefield and in 2017, helped FOTC to begin development of an educational program at Tolson’s Chapel for visiting school and youth groups.  FOTC was most recently awarded a grant from the Mary K. Bowman Fund for costumes and supplies to move forward with our planned experiential educational program.

In 2017, FOTC was recognized for our efforts to preserve Tolson’s Chapel by the Washington County Commissioners with the John Frye Historic Preservation Award.  We were additionally honored by Preservation Maryland with the 2017 Stewardship Award.  When it rains, it pours! 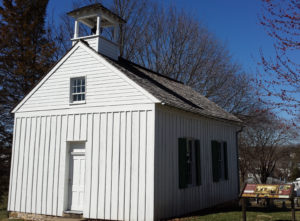 A view of Tolson’s Chapel in 2017, after the restoration.

We are sincerely grateful for the support we have received from the National Park Service, manifested in various forms – from former NPS Director Robert Stanton as keynote speaker at the Tolson’s Chapel Re-Dedication in 2012, to Superintendent Tyrone Brandyburg (Harpers Ferry National Historical Park) at our 2017 Rally Day event.  Perhaps most importantly, were it not for Dr. Dean Herrin’s intrepid research and the contributions of his interns at the Catoctin Center for Regional Studies, Tolson’s Chapel might still be a forgotten shack on the back street of Sharpsburg!  Antietam National Battlefield staff, under the guidance of Superintendents John Howard and Susan Trail, have been steady supporters of the FOTC mission, sharing their time and equipment and sending visitors our way to tell “the rest of the story” following the battles of the Civil War.  In fact, the post-emancipation/Reconstruction story at Tolson’s Chapel is so important that in 2017 National Capital Region staff earmarked funds to pursue a National Historic Landmark designation for Tolson’s Chapel (still in process).

These past sixteen years have been exciting, exhausting, enlightening, and educational for me and for the FOTC board.  And while they might deny it, I know this to be true – without the steady support and participation of the FOTC board members, none of the many things we have done could have come to fruition.  Most important to us are the many friends we have made along the way.  Without our friends and donors we could not continue our mission.  Thank you all for sharing our vision and supporting our mission over these past sixteen years!  And here’s to many, many more!

Please look to this blog for periodic articles from invited contributors covering a variety of relevant subjects!