Emergency stabilization of the Tolson’s Chapel major structural features – foundation and log frame – began in 2003 under several grants to Save Historic Antietam Foundation (SHAF; the Friends of Tolson’s Chapel was a sub-committee of SHAF until 2006).  Stabilization, repairs, and restoration work has been completed under the direction of David Gibney of Restoration Specialists, Inc.

Tolson’s Chapel is a braced post and log construction (Figure A.1 and A.2) on a rubble stone foundation.  When the 1940s asphalt shingle exterior siding was removed, the original board and batten (the battens removed) siding was exposed.  The siding boards were removed and stored during repairs, those not too heavily damaged by insects or rot to be reused.  Initial emergency stabilization required repairs to the foundation and replacement of the summer beam located in the crawlspace under the building.

The majority of the logs are native pine, but there are also some oak logs interspersed throughout the walls.  The logs were once whitewashed inside and out.  During the second phase of restoration, approximately twenty percent of the original logs were replaced due to insect damage and rot (Figure B).  These included part of one sill log and two of the original corner posts.  Sometime after ca.1940 – after the asphalt shingle siding was applied to the building’s exterior – the northeast corner post was replaced by the Tolson’s Chapel congregation with concrete blocks.  This block structure was replaced during the current restoration with a lighter frame construction (Figure C).

In order to save as much of the original fabric as possible, logs that were damaged but still retained enough structural integrity were repaired using epoxy consolidation.  A few logs had deteriorated sections removed and pieced together with new log Dutchmen (Figure D).  All replacement logs were identified with a “2008” date stencil (Figure E).

The entire log structure was stabilized and two coats of wood preservative and two coats of Boracare were applied to protect from future insect and water damage.  Original daubing was stabilized by placing netting over the surface.  Where logs were replaced, it was unfortunately necessary to remove the chinking and daubing.  The entire structure was covered with a vapor barrier to prevent moisture build-up in the walls.

Most of the original rough sawn native pine board and batten siding was found to be extremely deteriorated, however as much as possible was reused (Figure F.1 and F.2).  New replica Northeastern White Pine siding and battens replaced unusable siding boards.  The entire structure was primed and will be coated with a white stain. 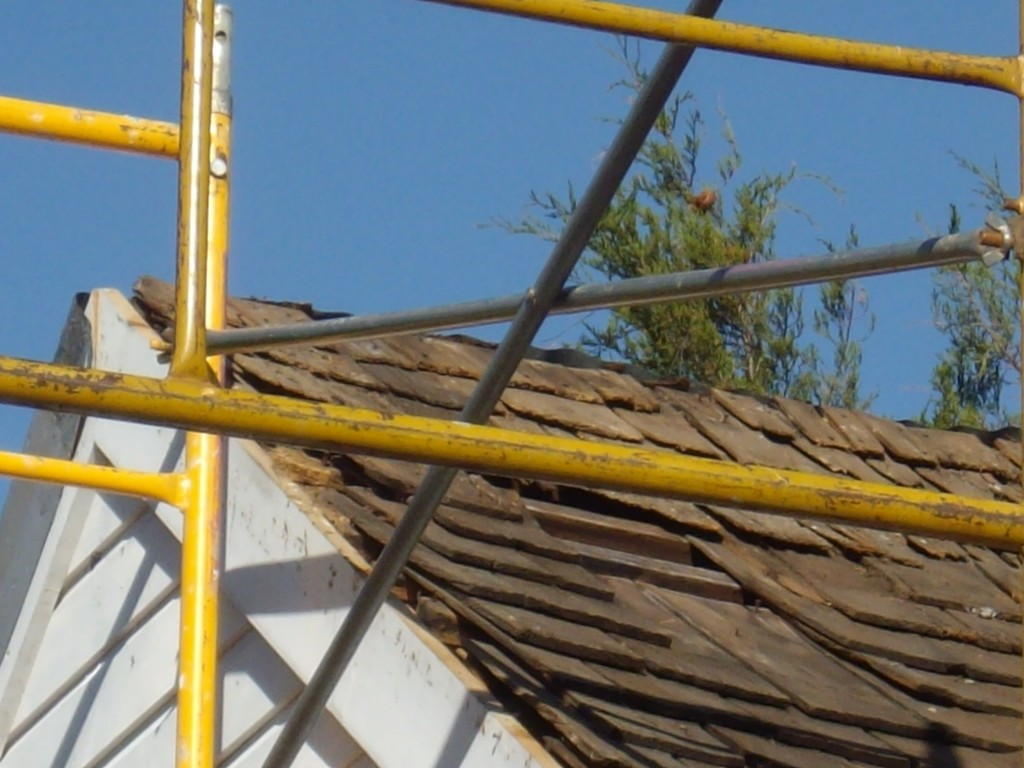 The windows were restored using almost entirely original material.  After removal of the corrugated metal roofing, earlier wood shingles were found in place (Figure G).  It was determined that these shingles probably replaced the original wood shingles ca. 1910.  The shingles were measured and new cedar replacement shingles of the same size were applied in September 2010. See Figure H.1 and H.2.

On the interior, the original plaster was repaired where necessary and a new skim-coat applied and the walls repainted with an historically accurate whitewash.

In the fall of 2012 the bell cupola was reconstructed based on a 1976 newspaper photograph of the chapel (Figure I.1) and historic photos of other local Methodist churches (Figures I.2 and I.3).  Final restoration projects include:  the two remaining exterior shutters, found in storage in the chapel (Figure J), to be restored and six additional shutters reconstructed based on the existing ones; the central brick chimney reconstructed; and the liquid slate blackboards restored (Figure K).

The restoration of Tolson’s Chapel was funded primarily by Capital Grants from the Maryland Historical Trust, with additional help from Preservation Maryland.